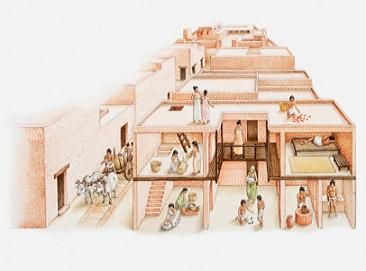 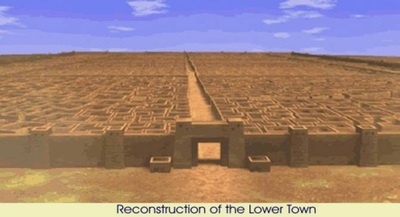 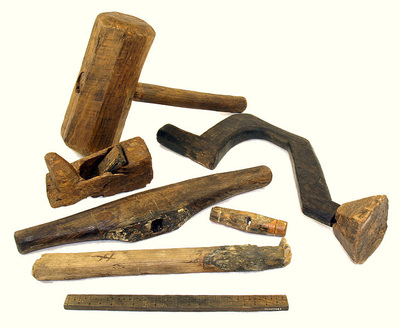 The Indus Valley held cities and towns that shared unique building strategies throughout their survival in history. The people of the civilisation were extremely intelligent and advanced for their time, learning quickly the uses of different building materials and tools, and the best structural layouts for the towns. Homes and public buildings seemed almost luxurious for their time, having a sophisticated plumbing setup and being multi-levelled. Functional and hygienic building plans were mostly consistent through the generations and kept the civilisation alive and in no apparent crisis with housing its people.

The Indus Valley people had well-built, well organised town planning. Towns were rectangular, with straight walls all facing north, south, east or west, and straight streets that formed a pattern like a grid and divided the city into block sections. The centre of a city often held a simple citadel, a mound-like stronghold, where the people would go to for protection if ever under attack.

Housing in the Valley was adequate and architecturally simple, yet outstanding. From one to two to three storeys, whether in the lower or higher part of town, houses contained these following features. Every household had continuous access to clean water from nearby wells and drainage facilities, including plumbing. The Indus Valley civilisation is thought to be the first with an urban sanitation system, again very advanced for their time. There was a bathing room, and sometimes individual rooms for each person. All houses in a town were identical, and built together in courtyards. Connecting upper levels to lower levels were sets of brick stairs or sometimes ladders. The majority of houses were spacious and had flat roofs; however in poorer regions some houses had no roof at all and were exposed to all the weather.

The sewers were brick-lined and found under the streets of the town. Mohenjo-Daro had the best sewerage system, which has remained intact for us to analyse today. The pipes were made of baked clay and ran all the way to the houses, taking waste from the bathrooms to the sewers. The sewers drained into nearby rivers.

The Great Granary is a mystery to today’s historians as to what its function was. Was it actually used to hold grains? Historians have been unable to find evidence to suggest that grains were once held there. It was thought to have been used as a place for farmers to store their crops, carts to load and unload, or even possibly as a temple. This massive building is made of wood on brick foundations and is over 60m long, with 6 large halls and arching doorways. The Great Granary is one of the significant buildings of the civilisation found in Mohenjo-Daro, along with the Great Bath.

The Great Bath is found in the middle of Mohenjo-Daro. It is believed to have been used as part of a religious bathing ritual for the people to gather together, and was very important to daily life. It had good drainage systems and was built with bricks that were held by tar and gypsum mortar so no water leaked. As can be seen, Mohenjo-Daro was the biggest and wealthiest city in the Indus Valley, with the most significant architectural constructions and the better sewerage systems.

In terms of building techniques, most structures were made of bricks. Some were larger than others, but each brick shared the same 4:2:1 ratio in dimensions, created by brick-makers. Soil-clay and water mixed to create a mud, which was pressed into any of the identical wooden moulds they used, and then baked hard in the hot sun or a kiln. When building, bricks were stuck together with a wet mud mortar. These bricks were a useful material for building as they were made of an abundant and renewable source and were very strong, allowing them to still stand today after more than 4000 years.

The people of the Valley discovered new techniques of building with metals that were mined or imported, and from this successfully produced lead, copper, tin and bronze. From these metals, they constructed some tools (mostly made of flint – a type of rock) that helped them build other things. Clay was used in the process of toolmaking and became the substance that many pieces of cookware, pottery and sculptures. Some tools that were made with the metals are hammers, knives, needles, axes, razors, saws and others used for agriculture.

The Indus Valley people are considered to be the first in many technological advancements, one of which being a developed measurement system. They had accurate methods of measuring length, mass and time by developing their own system of weights and rulers that were all identical. They were very intelligent and knowledgeable people who had a good understanding in mathematics and science. All their measurements were based on multiples of 16, like our metric system is based on multiples of 10. Having this sort of standard system across the whole civilisation prove how their specifically measured structures could withstand the years and not have faulted due to poor construction techniques. Along with constructing buildings and tools, they built boats and carts from imported wood to aid in their transport and trade.

When the Indus River flooded the city, the mud brick structures would begin to soften and crumble. Archaeologists have discovered that when this happened, another whole city was just rebuilt on top of the previous. This left an amazing preservation of history where archaeologists have been able to observe the city reconstructions through time in chronological ordering. An interesting observation that was picked up was that each rebuilt city above another seemed to be slightly less advanced than the one below, meaning that as time progressed, structures were actually built increasingly poorer rather than more advanced like one would expect. The civilisation seemed to have not preserved all of their perfect building techniques through the generations, whether this is from a lack of communicating and passing on techniques or as a result of laziness. However, each rebuilt city was still a greatly advanced achievement in history for just how ancient this civilisation was.
Powered by