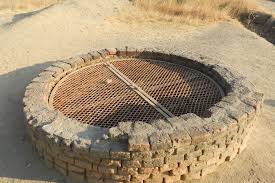 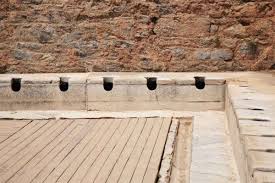 Indus Valley was very advanced in their water/ irrigation systems. The Indus Valley had one of the world’s first water irrigation systems. Wells were open to all households had access to water facilities and wells were always close by.  Some of the households of the Indus valley had water and waste systems and most homes had access to a bathroom and toilet that was connected to the drainage systems. Water waste was directed to covered drains that outlined main streets which were seen as unique and sophisticated for the time. If houses had bathroom’s or drainage systems upstairs terracotta pipes were used to bring waste down on to the streets. As bathing was also common and sanitation was valued, people would often bathe standing up by pouring pitches of water on top of themselves like a shower and allowing water to drain into  hole onto the floor that   Limestone was used to make sure that pipes would not leak and to insure stability.  It also offered a new level of health and sanitation to the people.  Waste cleaners cleaned the street drains/pipes and emptied the pits/ areas were sewerage waste water from toilets was held.

Irrigation was also used for river systems. Water was irrigated from the huge spring floods that ran from the yellow river, irrigation systems would clean and lessen the impact of flood damage. The flood water could also be directed to irrigate fields. This flood system may have been the Indus Valleys greatest triumph as they had harnessed the power to control the annual floods to their advantage, without the devastating impact that came with the flourishing of crops. Due to the success of their water systems and overall sanitation, the population of the Indus valley grew. Small dams and Inundation Canals were built to sustain water in a stable and controllable way so that it could be controlled ad easily transported/ distributed.

The Indus people were fully aware of the principles of health and sanitation. Towns people bathed in a bath located in the centre of the quadrangle in the middle of the valley. The Baths were around 49 feet long, 28 feet wide and 8 feet deep. Walls of the pool were made up of burnt brick to prevent the leaking of water. The pool was regularly drained to ensure cleanliness, this was done by draining off used water into a large pipe that led to the outside of the valley. The bath had 6 entrances and all contained stairs that led into the water. This building reflects the engineering genius of those in ancient days.

By examining the teeth and bones of the Indus Valley people, archaeologists can tell what the Indus valley people ate from the bodies they discover. Archaeologists also search pits of rubbish for animal bones, seafood shells, fruit seeds and other remains of carcass for clues to their diet.
The Indus people raised cattle, pigs, sheep and goats for food resources. The cows provided fresh milk and meat. Farmers grew fruits like dates, grapes and melons and other field crops such as wheat and peas.

Indus Valley people had a maintained and a constantly healthy diet. Majority people most likely ate more fruit and vegetables than meat. From the evidence seen of the teeth in skeletons archaeologists have discovered, it seems men were better-fed than women. Mostly every skeleton has a healthy set of teeth.
Powered by